Seeker Camp
Ido Front
The Village of Ilblu
Within the Abyss

The Abyss is a colossal pit discovered 1,900 years ago around the islands of the southern ocean of Beolusk. The vertical hole has a diameter of around 1,000 meters and is at least 20,000 meters deep, with its exact depth being currently unknown. It possesses a unique ecosystem, wherein lie the remnants of an ancient, yet advanced, civilization. Many have challenged the mysterious Abyss, pursuing countless hidden treasures and relics of immense value. Some are treasure hunters looking for Artifacts, while others are explorers determined to unveil the secrets the Abyss hides. To explore the Abyss, valiant cave raiders called Delvers were born, and the town of Orth was established at the edge of the Abyss.

The Abyss still contains many sections that have never been seen, and carries many dangers. Hazardous habitats that defy common sense and otherworldly creatures adapted to the unique environment are major obstacles to explorers.

All over the Abyss, there is a mysterious force field called the "Lifeblood of the Abyss". The force field acts as its main source of energy, carrying nutrients, producing light and sustaining life, in a similar fashion to the Sun. While it is present everywhere, it seems to be more prominent the closer one gets to the center. More savage and dangerous creatures are often found in areas where the force field is most prevalent, and the branches of vegetation always point towards the center of the hole, their main source of energy for undergoing photosynthesis. Delvers use this fact to guide themselves when they are lost. The force field itself is invisible to the naked eye, but it can be detected as a vague fog that limits the vision of humans. The field is also constantly moving, following the consciousness of living beings. There are a few specific spots in the Abyss, usually far away from the center and in secluded areas, where the force field doesn't exist or is extremely weak.

The great pit also appears to have some form of time distortion; though it is unclear if this is a fact or merely a feeling. The White Whistle Delver Ozen claims that the deeper one delves, the more one's sense of time breaks, with the effect becoming extreme from the 5th layer onwards. As an experiment, she once descended for what she thought was a couple of weeks, but by the time she returned to the surface, several months had passed. While there is little evidence to prove it, she considers it a possibility that time speeds up the more one descends.

The Curse of the AbyssEdit

Though the Abyss is riddled with countless dangers and hazards, one of the greatest challenges facing Delvers is, in fact, the ascent from it. This is due to a phenomenon called the Curse of the Abyss. The term refers to a series of symptoms that manifest upon ascending while inside the Abyss, with its more scientific name being the "Strains of Ascension". The effects of the Curse manifest after ascending around 10 meters within the Abyss, and there's no way to avoid it through conventional means. The Curse affects all living things; however, the creatures that inhabit the Abyss have developed ways to sense its flow and avoid it.

The deeper one delves, the more severe the symptoms are, starting at dizziness and nausea and gradually rising to intense pain throughout the body, loss of senses and even death. This makes the return trip from the Abyss extremely difficult, and it is not uncommon for delvers to perish on the way up. Particularly, the curse of the 6th layer ("loss of humanity or death") makes the return journey physically impossible for humans.

The Curse results from piercing the force field of the Abyss while ascending, although this fact is not generally known. Therefore, areas where the force field is weaker also result in the effects of the curse being less severe. In certain specific places, like Nanachi's hideout and the Village of Ilblu, the force field isn't present at all, and so the Curse doesn't occur either.

The Blessing of the AbyssEdit

An exceedingly rare and top secret phenomenon occasionally takes place within the Abyss under very specific circumstances. It was first discovered by the White Whistle Delver Bondrewd when he was experimenting with the Curse of the 6th layer. Much like with the Curse of the Abyss, the event occurs during the ascent, but two people are needed to trigger the phenomenon. If one person bears the entire burden of the Curse for both people (through the use of an Artifact or another similar instrument), the other is spared the effects of the curse.

Bondrewd modified several Artifacts to create an elevator to observe the Blessing phenomenon. This two-chambered elevator carries two people but forces the entire weight of the Curse onto a single person. If the person receiving the Curse doesn't die midway through, the other is spared the Curse's effects. Bondrewd discovered deep love between the two people results in the event he called a "Blessing" for the one who does not receive the burden of the Curse. While the Blessing was experimentally demonstrated, Bondrewd cannot explain the reasons behind it.[citation needed]

The appearance of the blessed changes. They grow fur all over their body and some of their traits, like the eyes or fingers, become mutated. The Blessing is not merely in looks: The one gifted gains the ability to observe the force field of the Abyss, something that only the predators of the deep are able to see, and is an incredibly useful ability for delving in the pit. It also appears to increase their physical fortitude to some extent.

A religion that was formed around the Abyss itself, and it appears to be a very common belief among those that delve into the Abyss. Instead of believing in a God, those that turn to this religion deify the Abyss itself. Because the bottom is unknown, it replaces a deity and grants them hope for an after-life. It's based on the principle that if one loses one's life within the Abyss, one's soul will descend to the bottom and live as a form of spirit of the Abyss. The unreachable depths of the pit makes people believe that it transcends life itself.

1st Layer: Edge of the AbyssEdit

4th Layer: The Goblets of GiantsEdit

6th Layer: The Capital of the UnreturnedEdit 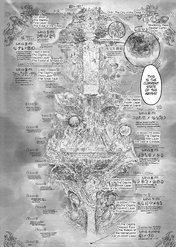 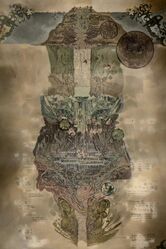 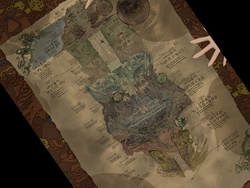 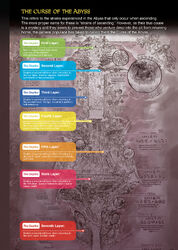 Add a photo to this gallery

Retrieved from "https://madeinabyss.fandom.com/wiki/The_Abyss?oldid=16996"
Community content is available under CC-BY-SA unless otherwise noted.