Made in Abyss Chapter 060

Gold is the sixtieth chapter of the Made in Abyss manga series.

With the village falling apart, an exhausted Faputa leans against a still stable rock while debris falls around her. As the environment crumbles, she is hit on the head by the debris just before the ground under her also breaks apart and she finds herself in a free fall.

Whilst falling, she has a flashback of asking Maaa and Majikaja to bring the trio out of the village. She wonders if she would still have some power left if she had eaten Maa and Majikaja earlier, but she no longer cares as her purpose for existence is complete. Suddenly, Reg’a arm extends from the ground below to catch her fall as more debris fall onto them.

The scene shifts to Riko and Maaa, who are in the midst of the village falling apart. Riko, seemingly still weakend from the use of her whistle, hands Maaa a doll which bears similarity to the one taken from Maaa during the Balancing and apologizes to Maaa that the replacement doll she made for her is not finished yet. Maaa takes the crude doll and holds Meinya and Riko close with a hint of satisfaction in her expression.

Cutting back to Reg, Majikaja's container has become completely immovable and, as they embrace their demise due to the village’s destruction, they resolve themself to at least finish the final request of Faputa. Majikaja exits their container in their true gaseous body and enters Faputa’s mouth via her mouth who is still unconscious. This allows Majiokaja to take control of Faputa's body and defends the group from the falling debris as the village comes to its end.

Seemingly after a bit of time has passed, a Turbinid-Dragon is displayed trying to get up from the ruins of the outskirts of the village but it is stomped to death by another one of its kind.

Meanwhile, the remaning members in the group have taken refugege in cave-like ruins. As Faputa slowly wakes up again she takes notice of Vueko. Nanachi asks Riko if she is doing alright which Riko affirms while holding the doll she had made for Maaa. Even though they have all disintegrated, she will never forget the villagers for saving them to which Nanachi agrees they will rember, too.

Vueko tries to verbally communicate with Faputa, but Faputa tells her that there is no need for Vueko to try to speak as she can hear them anyways. Faputa tells her that she didn’t know of her existence until Belaf showed her his memories via his scent and she wants to learn more about the mother she never got to know. As Faputa questions if she really resembles her mother that much, Vueko clearifies that while not in personality her smoothness and warmth are similar. Faputa also tells Vueko that while she had thought to have inherited everything from her mother the memories of Vueko existing where nowhere to be found within her and assumes Irumyuui didn't even want to part with them to the point of not even letting her have them. As Vueko's thoughts drift to old hearsay of even trash turning to Gold, her final thought is how ironic it is she recalls this now. As her conciousness becomes to grow weaker, Vukeo addresses Faputa as Irumyuui and tells her how happy she was to have encountered Irumyuui and the change she had due to meeting her. Then, she passes away which saddens Faputa much to her confusion due to Vueko belonging to her mother and not her.

Afterwards, the group ventures out again as there are no signs of the beasts nearby. Faputa begins digging a grave for Vueko and making a tombstone for the ones that have passed away, saying that Gaburoon told her to do this when someone dies. This saddens her even more as she remembered that Gaburoon was also destroyed. Reg asks her to come along with them but she retorts by saying that he can't even rember their promise. Reg saddened says that even after all this time he can't remember and feels bad for it to which Faputa gets frustrated and says it means that she basically has no relation with Reg anymore. Reg counters this by retorically asking her if is former self ever saw this mopey side of Faputa. He continues on with expressing his current self has seen how scray she was, her pain and her beauty and that he wants to gone on an adventure together with her. After a brief exchange over Faputa's relief of Reg showing this level of determination for her, she then turns her attention to Riko, telling her that Prushka is saying Riko's role was caring about the people she met. Riko is shocked that she can hear the voices of White Whistles. Faputa then decides to head off on her own and Reg questions her if she won't come with them. She replies that she will think about it before holding on one last time to Reg's head and afterwards begins to head away onto her own path. As Faputa looks back one last time she states "It belongs to everyone" before heading out and her depature being signified with a bright shimmer of light. 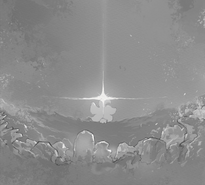