Made in Abyss Chapter 059

A Warm Darkness is the fifty-ninth chapter of the Made in Abyss manga series.

The chapter opens with Vueko travelling upwards in the village. While she does so, Vueko reminisces about her past with the Ganja and encountering Riko. She thinks about how Riko has accomplished so much, while Vueko herself wasn't able to decide anything for herself, except for one important decision: joining the Ganja on their adventure.

Suddenly, Vueko is abruptly taken out of her thoughts. Due to the boundary vanishing, the curse of the 6th layer is beginning to affect her and her body begins to deteriorate as she rapidly begins to lose her humanity. Weakened, she collapses on the steps. Pakkoyan suddenly appears, calling to Vueko, before tearfully throwing her down the stairs, outside the reach of the curse. Pakkoyan then vanishes herself, due to being outside the boundary of the village.

A concerned Nanachi arrives shortly after. After checking her condition, Nanachi takes Vueko back to the group, and they get ready to make their way back to Faputa with having sent Reg ahead beforehand already.

The scene shifts to Faputa, who is still in battle with the Turbinid-Dragons, while Juroimoh has fallen already. While Faputa prepares to engage the Turbinid-Dragons again, Reg joins the scene and, following a short conversation, assures her he has come to take over and not in order to get in her way. Riko blows her white whistle, which powers up Reg, and he begins his battle with the dragons. Meanwhile, Faputa notices the rest of the group and approaches them.

Upon seeing Vueko in her transformed state, Faputa seems sorrowful and expresses she will direct her attention to Vueko later. She then shifts her attention to address the present villagers in the group, and tells them while she can't forgive them, she will give them a role to fulfill.

She has come to understand the value still present in the village and how best to utilize it, and plans to draw all of the remaining value out of the village, thus destroying the village and giving her mother peace. Moogie reassures Faputa that they came for just that, and requests Faputa do it for them too. Faputa agrees, and prepares.

The scene shifts back to Reg, who has managed to drag the creatures outside the village. Once outside, he notices that the bridge leading to the village has been enlarged, and realizes that when Wazukyan gave up most of his body to the village, he also enlarged the bridge leading to its entrance, thus giving the creatures an easier way to invade the village. Reg contemplates his options and, knowing he won't last long under these conditons, instead of using the incinerator he extends his arm and swings it forcefully around, creating enough momentum to destroy the bridge.

Faputa hears the battle outside. Looking up at the walls of the village, her eyes fill with tears as she speaks to her mother, saying she was her reason for living. She places her limbs to the ground and with determination, states she will now fufill her role. A powerful force sweeps from Faputa, and the walls of the village begin to crumble and fade away.

As she watches the village crumble away, Vueko begins an inner monologue, reminiscing about being unable to forgive herself after eating Irumyuui's children, for not perishing with Irumyuui, and realizing during her imprisonment that Irumyuui really wanted more than just children. Finally, Vueko thanks Irumyuui for maintaining her humanity, and comes to accept seeing Irumyuui off first is the sin she has to carry: Her very own warm darkness. 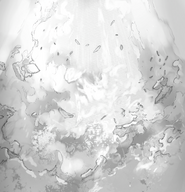