Made in Abyss Chapter 058

Towards the Path of Flame

Towards the Path of Flame is the fifty-eighth chapter of the Made in Abyss manga series.

After her inner monologue, Faputa sets her eyes on the invading creatures again. As the villagers look onto her with hope filled aspirations she thinks to herself silently that they are hopelessly foolish. Faputa lets out a scream which causes Juroimoh to rise next to her.

She instructs him to rout the creatures and Juroimoh brings forth his "Great Sword." With a mighty swing, Juroimoh takes out multiple creatures while Faputa lounges at the ones that jumped out of the way and tears pieces out of them. When Faputa is bitten by one of the creatures, the value she has taken in seemingly instantly balances the creature and consumes part of it with the villagers also poiting out it seems akin to the Ilblu Balancing.

As the two continue fighting, they eventually come face to face with a Turbinid-Dragon. Faputa begins to attack its leg and makes its poisonous scales errupt. As she continues to battle the Turbinid-Dragon, she comes to the inner conclusion that this is no longer just a fate she inherited but the fire she made burn herself; her own will.

Meanwhile, Riko regains consciousness to the relief of the people watching over her; Maaa, Moogie and Mepopohon. Moogie points out the same has happened duirng the Fuzosheppu incident and upon Riko asking why it seems that they are shaking Moogie tells her that they are on top of a large ship-like container of Majikaja.

Majikaja states that the Narehate that helped them with this massive body is gone now and Riko thanks them for helping them. Riko then remembers about Nanachi and Reg, and slightly panicks thinking they left them behind, but Moogie points out to her that both are also with them. The trio apologizes to each other since they all think they made huge mistakes. Riko also feels guilty for involving Moogie and the others, but Moogie soothes her by telling her that they don't feel like the three inconvenienced them.

Now that they learned the truth about the village, Moogie suggests that the three should talk to the one that also brought them into this, namely Wazukyan as they just spotted him. Wazukyan, whose body is barely still holding up, greets them and also adresses that it is a rather crude way of Moogie saying he was the one who brought them into this since it was their actions they took of their own free will that lead to this.

He then adressed Riko and asks her if it was worth comming so far in her adventure. Riko thinks for a brief moment and tells him that it was totally worth it because if she had stayed on the surface she would have never even been able to imagine the places she saw so far and the people she met.

She also tells him that she had the Star Compass a little while ago and though she lost it is sure the next one to find it will also go on their own adventure. To her, if that person also feels their journey was worthwhile, it is worth it to her.

Wazukyan, though not quite sharing the same outlook anymore, admits that is a nice outlook to have on it. Nanachi then interjects and questions Wazukyan what ultimately his goal was. He tells them that they wanted to become something more than human as they felt this was needed with steady buildup. Thus they find themselves at the logical conclusion with Faputa seeking to find her own path to move forward.

There is only one thing he wishes to do now, and that is to tell them to watch after Faputa. Reg tells him, at this point, this goes without saying. As Wazukyan begins to fade, he recites about how they are homesick children on a journey through the Abyss and something more terrifying than a dream gone unfulfilled waits beyond the Golden city. His hopes are that they try to make their dreams a reality and abandon hope.

Riko also thinks things will not all go to plan as he says, but displays a postive outlook regardless. Taking note of that, Wazukyan fades away completely.

After Wazukyan faded away, Nanachi questions to themself how far Wazukyan may have been able to see into the future. Their thoughts are interrupted by sounds in the distance and Majikaja and the other villagers inform them that it is Faputa, calling to them for the first time. As such, they think they will regret it if they don't follow it as it feels like they would get destroyed if they don't obey it.

But as they feel like they are the same as Riko, they let her make the final decision on where to head to. Seeing how it is dangerous everywhere, the group decides to go with the villagers. One of the villagers also notes that Vueko should have been with Wazukyan but is nowhere in sight. Reg also questions alarmed if they might have missed her along the way, but Riko says they should be able to catch up to her if she is around because she is not that fast.

As Riko climbs back onto Majikaja, Moogie hands her the part of the letter that was sold at the Ilblu's Market of Value and tells her that it is a present from her and Majikaja they obtained by trading in a part of Faputa Reg gave them.

Riko thanks them and, after having a heartfelt moment with Maaa, the group moves onward. 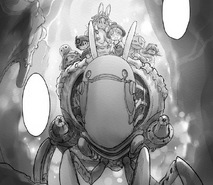