Made in Abyss Chapter 057

Value is the fifty-seventh chapter of the Made in Abyss manga series.

As the creatures make their way inside the village, they start attacking the shocked villagers. Moogie, seeing how their fellow villagers are decimated and shaken by the events unfolding, says that it is over for them and all will come to an end now. She is pulled out of her shock by Maaa who carries the unconscious Riko and gives her new purpose to at least save Riko.

Faputa, who witnesses the creatures killing the villagers, becomes upset at that, as she interprets it as them taking away her duty to destroy the village and eliminate the villagers, and starts attacking them.

As Faputa is about to be attacked by a Turbinid-Dragon, Gaburoon tries to shoot at it with a broken arm. Faputa is happy that Gaburoon is still functional and tells Gaburoon to hurry to get up and move because she doesn't want them to get completely destroyed. Gaburoon apologizes to her for having not been able to protect her and has an inside monologue of not having regrets though having deep regret for they won't be able to learn how Faputa, being born holding vengeance, obtained something irreplaceable and called it "value". Gaburoon tells her the days they spent together were their precious "Haku" just before the Turbinid-Dragon crushes them with its leg and destroying them completely.

Faputa is shocked and angered by that, but a blast from the Turbinid-Dragon sends her flying. Afterwards, she is too damaged to move and contemplates what value lies in her immortality if she is unable to move anymore. As she lies on the ground, the villagers begin approaching her and feed the value of their bodies to her to save and regenerate her.

At first, Faputa is greatly irritated by this; spiting the villagers with internally monologuing that all they do is want. This continues with her going over that she always knew she was born with the duty to annihilate them. However, things she doesn't know keep increasing with even the people she thought to know having unknown sides to them. However, she slowly starts to feel heat that tells her that something beyond that duty lies hidden and value she not yet understands can be found there.

As her inner monologue continues one of the villagers is snatched by a creature, but before it can eat its prey a now fully regenerated, more powerful Faputa rips parts of its head and the upper body of the villagers away and eats both.

Faputa lets out a scream, rattling the creatures and onlookers. As she recalls the memories she witnessed, Reg's words to her and the inner monologue of Belaf before his death, she steps forward having gained a stronger looking form with longer hair and a symbol in her eye and innerly monologues "Don't decide for Faputa. What value means is for Faputa to discover, Sosu". 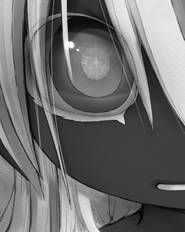