Made in Abyss Chapter 056

A Gift is the fifty-sixth chapter of the Made in Abyss manga series.

With Reg knocked out, Faputa carries him back and instructs Juroimoh to hold him down so he can't interfere if he wakes up. Turning to Riko, Faputa blames her for Reg having forgotten about her. Vueko, scared for Riko's safety tells Wazukyan to let her go, but he informs her she would just get killed if she were to try to help. The villagers try to protect Riko, but Faputa is to fast for them and launches an attack against Riko.

However, before it connects Gaburoon blocks Faputa's attack causing their body to be destroyed. In shock, Faputa questions why he protected Riko and Gaburoon informs her that she would have lost Reg forever if she were to hurt Riko; hence he protected Faputa's future and becomes dysfunctional.

The now conflicted Faputa reaffirms to herself she has no way of stopping now for the villagers had deceived her mother. However, before she can start her next rampage, Faputa is knocked back by an unseen force. As she angrily looks around, she spots Belaf and Nanachi who both have arrived at the scene; much to the relief of Wazukyan.

A short exchange between Nanachi and Faputa follows in which Nanachi also asks Riko to leave it to them to deal with Faputa, and Belaf advances towards Faputa. Faputa notes that the smell of her mother is strong on Belaf and decides to kill him first. As Faputa starts tearing through Belaf, he has an inner monologue of having a gift for Faputa which he hopes for her to accept due to understanding now that when he begged Irumyuui to take everything from him she left this behind because she wanted Faputa to see it.

Faputa shatters Belaf's head apart and thus his "gift" is set onto Faputa, in a smoke-like mist, being the feelings and memories he held of Ganja's past. Belaf thanks Faputa for being with him in his final moments and tells her she will have have to decide her own value during end of her destiny and he encourages her to move forward without fear as he wants her to enjoy her adventure. Afterwards, Belaf passes away.

With that, Faputa is even more conflicted and halts her assault. Nanachi instructs the villagers to take Riko and escape underground, due to the village barrier being broken, while they will try to wake up Reg. As Nanachi makes their way to Reg they get a glimpse of Wazukyan and theorize he might have hoped for a scenario in which Faputa had given a cradle to Reg to be used on Riko to create a mobile village with Riko as base.

Meanwhile, Vueko is saddened by what happened to Belaf but Wazukyan is relieved as Belaf has shared his feelings with Faputa, and thus Faputa most likely wouldn't kill Vueko now; though he assumes he would be in real trouble now. Wazukyan apologizes to Vueko before warping her in the rest of his body and leaping down with her.

Faputa, in distraught by Belaf's parting gift, tries to reaffirm again that she is the fire that will burn everything to cinders even after what she just witnessed but has exceedingly more trouble in doing so than before. Then, Hermit Rats show up next to her feet reminding her of the one she saw in the memories. Faputa tells them to get away as it is dangerous but one is quickly snatched up by an unknown avian creature and both her and Nanachi realize with the village barrier gone creatures have made it inside the village now; with Turbinid-Dragon making its way inside. 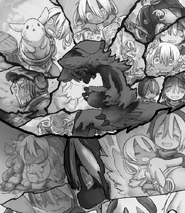