Made in Abyss Wiki
Register
Don't have an account?
Sign In
Advertisement
in: Spoiler, Manga Chapters, Volume 9 Chapters

Made in Abyss Chapter 055

Faputa and Reg is the fifty-fith chapter of the Made in Abyss manga series.

Faputa continues her one sided battle against the villagers, easily ripping through them. Even the Ilblu Balancing becomes a disadvantage to the inhabitants. As Moogie, Riko and Reg watch the destruction unfold, Moogie is saddened by it but also conflicted with their urge to want to touch Faputa.

After seeing Riko conflicted and not wanting the things the villagers hold dear to be destroyed, Reg decides to try to confront Faputa. He approaches her and requests her to stop by siding that one of his friends is still in the village, but Faputa tells him she will not stop. She also remarks that he shouldn't try to use his friend as an excuse just so that he wouldn't hurt her feelings and say clearly what he wants to express.

Reg tells her that he will stop her and Faputa tells him she will make him rember what he has to do, even if it means fighting him to do so.

In a short flashback, it is shown how Reg and Faputa first met shorty after Gaburoon had been damaged by a Turbinid-Dragon.

The scene shifts back to the battle between Reg and Faputa, in which Faputa tries to make Reg rember his past with her. Reg remarks in the battle that Faputa should express herself better which shocks Faputa as Reg was the one from whom she learned to express herself in the delver language.

In another flashback, it is shown how Reg spent time with Faputa and Gaburoon, and how Faputa and Reg grew closer.

The scene shifts back to the battle, and after an exchange of blows, Reg instructs Riko to blow her whistle. This triggers an activation in Reg resulting in him emitting a white glow with enhanced speed. Faputa curses at Riko for using Prushka against her and reveals it was her who instructed Gaburoon to bring the stone into the village. It was in order to test if the bond between Riko and Prushka was truely genuine as well as in hope of bringing Reg to the village because she thought it would trigger his memories to come back.

Suddenly, the iron rain of the 6th layer starts, and Wazukyan decides to use his own body to protect from it.

In yet another flashback, Faputa shows Reg the outside of the village and refers to it as her mother. Reg questions why she wants to destroy her mother and Faputa explains in her view her mother is constantly being kept alive in a rotting state and will finally be able to rest once the beings living in her are eradicated. She also states that just like babies cant go back inside their mother, Faputa cant go inside her mother, and thus is unable to go through the barrier.

Gaburoon states that Faputa is aware of the culture and infrastructure that has been developed in the village, but still insists it has to be destroyed, because she was born with that nature in her.

Reg states his hand is able to release a power that could be used for that, but as he currently is going up the layers to find something important he can't use it right now due to not knowing what will happen to him after his next use of it. He promises to come back afterwards and figure something out.

Later, before he leaves, he asks Faputa to promise, and after they settled her fate, to go on an adventure with him and Faputa seems happy about it.

The scene shifts back to the fight, with Reg having managed to gain the upper hand. Torn by snippets of memories from his past coming back and tells her in tears if she keeps following her currently path she will keep burning herself until she eventual burns herself out and asks her how he can stop her from doing so.

As his tears fall on Faputa's face she remarks how he his kind hearted but also a fool and powerfully slams him down on the ground.

In the Volume extras, Faputa sneaks into the camp set up by the Riko group while they are asleep. She questions why Reg hasn't sought her out and inspects expects both Riko and Nanachi. Afterwards, she takes Prushka's Stone with her. Once returned to Gaburoon, they offer to bring it into the village to get the stone worked on. Gaburoon also notices that Faputa brought her from Nanachi and Riko with her and Faputa explains they will make a talisman with it in the Beast of Omen for protection. Gaburoon remarks that it would be easier if she would interact directly with the Riko group to which Faputa tells them to be quiet. 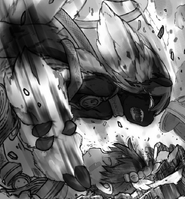 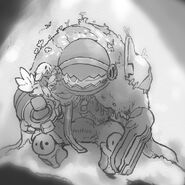