Made in Abyss Chapter 054

All that you Gather

All that you Gather is the fifty-fourth chapter of the Made in Abyss manga series.

With Ilblu's barrier starting to disperse, to the shock of Nanachi, the Narehate in the rubble of Belaf's house start to seemingly slowly fade away.

Belaf informs the still confused Nanachi that he has bestowed his memories of the past to them, due to having to take his leave now. For him, his memories represent his value. So in a sense, he transfers his value to Nanachi because he likes the relationship they have with Mitty.

The conversation is loudly interrupted by the roars from the ongoing battle between Faputa and the villagers. Belaf tells Nanachi Faputa has returned and will not stop her rampage until the village is completely destroyed. He also lets them know he releases them, and they may go wherever they want now.

As Nanachi is about to take their leave with Mitty, Belaf points her in the direction where the barrier started to disappear. If Mitty should be brought beyond, she will cease to exist. This is because every being that was created in the village can only exist in it, and will stop existing if taken outside it.

He promises if Nanachi should choose to remain, he will do anything in his power to protect Mitty and them. Nanachi is torn, due to the happiness they feel for having gotten a second chance to see Mitty, but decides their blessing wasn't given to them by Mitty just to remain in a dream. This time, Nanachi chooses to set Mitty free with their own hands and starts making the way to the end of the barrier. Belaf as well, starts heading for the barrier. As Nanachi gets closer to the barrier, they reminisce about all the new things they learned and with, teary eyes, tells Mitty they will definitely meet again. After that, Mitty fades away completely.

As Nanachi is close to crying, the Narehate from Belaf's house hand them their head piece back and fade away, while Belaf approaches the end of the barrier. As he fades more and more, he internally monologues that, whether it be despair or joy, all things you collect add to your value.

Meanwhile, Reg wakes up, after having passed out due to his incinerator, from a loud shriek. Riko, glad that he finally woke up, tells him Gaburoon has protected them while Reg was unconscious. Reg thanks Gaburoon, but is also informed by them that this situation happned due to Reg's resolve. Riko pulls Reg up and asks him to do something about the current situation. As Reg sees the aftermath from the battle between Faputa and the villagers, he is stunned.

All villagers fighting Faputa seem to have been torn apart and lie in piles to her feet, with Faputa still busy tearing the corpses apart. 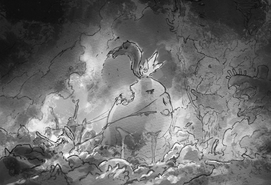