Made in Abyss Chapter 053

Prelude of Disintegration is the fifty-third chapter of the Made in Abyss manga series.

Juroimoh continues his attack by compressing the gooey liquid masses and firing them in Reg's direction. Reg contemplates using the part of Faputa he still holds to trick Juroimoh into stealing it, and thus triggering the Ilblu Balancing.

However, Vueko notices his plan, and shouts at him to not try it because Juroimoh is unaffected by it. As Reg is thinking of another way, Juroimoh creates a thin membrane with the gooey liquid masses and flings it towards Reg. Reg manages to pull himself out, but, because of the size, villagers and Riko also get caught up in the membrane.

Without much time to think, Reg decides the best solution is to fire his incinerator and rips away the membrane as well as parts of Juroimoh. However his shot also creates an opening in the village. Afterwards, he starts panicking because soon Faputa will arrive and the situation will likely turn into a worst case scenario. Reg asks Moogie, Majikaja and Maaa to protect Riko while he is unconscious, and gives them the part of Faputa as payment.

Shortly afterwards, Faputa arrives. Juroimoh roars at her, but is quickly hit by a shot fired by Gaburoon. Faputa tells the onlooking villagers she will not forgive their sins and the time for their "extermination" has come.

Juroimoh fires the gooey liquid masses at Faputa, but instead of causing her damage it heals her injuries. She leaps down in front of the crowd of villagers and charges at them.

The scene switches to Belaf's house, where the trembles of the ongoing battle shake the ceiling. Due to that, Nanachi wakes up and tells Mitty they had a dream they didn't want to wake from. Upon waking up completely, Nanachi notices the ceiling has been destroyed. They ask Belaf what is going on, and he tells them it is time for them to wake up and that the dream is not a dream anymore. 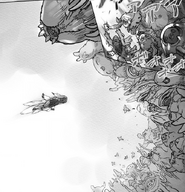