Made in Abyss Chapter 052

Faputa's Promise is the fifty-second chapter of the Made in Abyss manga series.

While Vueko is telling the others about her past, Reg and Faputa are making their way back to Ilblu.

Reg is carrying the body parts Faputa ripped off herself, while she is resting on his head. A short exchange between the two follows, in which Faputa requests to be patted on the head by Reg, followed shortly by noises of creatures attracted by the smell of Faputa's blood, and they quickly hurry to the entrance of the village.

Riko, alarmed by Meinya, quickly peeks outside Ilblu's barrier to greet Reg. In doing so, she catches a short glimpse of Faputa, and Faputa notices Prushka's new embellished form. Immediately after Reg steps inside the barrier with Faputa's body parts, the village reacts similar to the Ilblu Balancing, but far stronger and more uncontrolled.

Reg panics and contemplates to bring the parts to Belaf right away, but is stopped by Vueko because she assumes seeing them could drive Belaf insane. When Vueko asks Reg how he acquired the parts, Reg tells her Faputa gave them to him so that he would fulfill his promise.

In a flashback, it is shown how Faputa, knowing Reg is too kind to destroy the village, requested him to become her "helper". In the past, Reg had told her his incinerator should be able to "rewrite" the laws of the Abyss itself and allow Faputa to bypass Ilblu's barrier.

Wazukyan, who had eavesdropped the conversation, concludes Reg must have been "The Prince" and is surprised Reg managed to secure parts of "The Princess". He also casually greets Vueko, expresses his joy of her finally being able to leave her pit, and asks her if she already told them about "The Princess". Vueko reluctantly confirms she has, but notes she told the story from her point of view.

Wazukyan shifts his attention to Riko and asks her if she has come to hate him now, knowing the past occurrences. Riko states she doesn't really know Wazukyan well enough to come to hate him, but likes the village as it has many inhabitants who she can relate to.

Wazukyan elaborates that she most likely feels that way because she is one of the few Delvers diving past the point of no return, and the villagers were once the same, with the village being a place for the ones with nowhere else to go. This makes Majikaja and Moogie a bit nostalgic and they admit they often dream of challenging the Abyss again, because their journey wasn't over before they came to Ilblu.

Riko, addressing Wazukyan again, says while she doesn't know him too well, he doesn't seem like a person whose deepest wish was a place for the ones who have nowhere else to go. An adventurous person like him who set out to find the Golden City would never stop at the entrance to it, which is the 6th layer, and Riko asks him why he is pretending to have given up on his quest.

Wazukyan expresses his joy for her observation skills and notes in the last 150 years she is the first to notice. Riko takes some time to think and when asks Wazukyan if he perhaps hopes for her to use the power of the Cradle to allow the people of the village to set out for an adventure once more. Wazukyan, speechless, asks how she came to that conclusion, to which Riko says she was in a similar situation before, and Wazukyan once more praises her obsertivity.

Moogie, addressing Wazukyan, tells him while zhey would like to venture in the Abyss again, Moogie feels it would be unfair to force Riko to make such a wish, to which Wazukyan replies that nobody is forcing Riko and it is a decision only the ones challenging the Abyss can make; namely Riko's group.

Before anyone else can say something, Juroimoh shows up and starts attacking. Wazukyan quickly grabs Vueko and moves to a higher position to avoid Juroimoh. Reg manages to draw Juroimoh's attention and a fight erupts between them, which leads to Juroimoh transforming into a even more monstrous form with the dark gooey liquid masses. While observing, Vueko asks Wazukyan why Juroimoh has the same name as her adoptive father who used to abuse her. 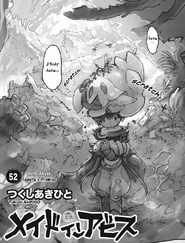