Made in Abyss Chapter 050

The Cradle of Desire

The Cradle of Greed

The Cradle of Desire is the fiftieth chapter of the Made in Abyss manga series.

Belaf, Vueko, and Wazukyan discuss on what to do since their "Pseudowater" appears to be infected, or some unknown creature of the Abyss. They decide to continue using it anyways as a stopgap from dying of thirst. Wazukyan inquires to the Interference Units about a stone found by the scavenging team which is revealed to be an Artifact called the Cradle of Desire. The Artifact is said to be able to grant the user's deepest wish when touched if the mind of the holder is not "messy or complex," as it tends to be the case with mature humans, and that the fate of the scavenging team was due to the state of their minds. They also mention that "immature" humans have a higher chance of getting their wish granted, due to their minds having less complex of messy thoughts.

After Vueko sees Irumyuui is still suffering from the effects of the water, she requests to use the Cradle of Desire to try and save her. The Interference Units say that there is a high chance that giving the Artifact to Irumyuui will grant her wish and Wazukyan allows Vueko to use the Artifact on Irumyuui, also believing this will bring them salvation. The day after Irumyuui was given the Artifact, she is all better and doesn't feel any pain, but the Artifact had fused with her body, being implanted in her chest. Also, she was still disfigured from the illness caused by the water. As time progressed she became more and more metamorphosed, as she became what she wished to be.

Because most of the members of Ganja were either dead or dying, the Interference Units attempted to gather water from sources up higher in the Abyss, which bore no fruits as none of the water was drinkable and contaminated the barrels, thus making them unusable.

One day, Irumyuui gave birth to a creature with a similar appearance to a Neritantan of Meinya; the next day it died due to it not having organs to digest food. She then proceeded to give birth to more and more of these "children", which all promptly died of starvation. This caused Irumyuui a great deal of grief and Vueko tried to comfort her. Later on, Vueko also fell ill and stopped being able to look after Irumyuui. Then, Wazukyan fed Vueko something she described to taste delicious with a scent of fat.

Upon awakening, Vueko was healed. Seemingly, she has a bad feeling about what Wazukyan gave her to eat and upon questioning him he reveals the others had been healed as well, saying "That kid saved us all." 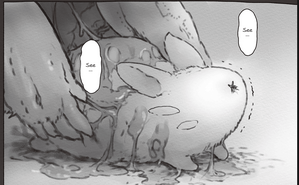 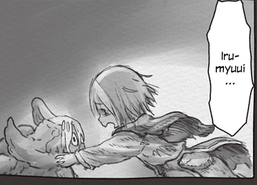