Made in Abyss Chapter 049

The Golden City is the forty-ninth chapter of the Made in Abyss manga series.

After finding out about the effects of attempting to ascend from the 6th layer and being content with the fact they are not returning to the surface, Ganja decides to set up a permanent camp. Ganja requests the Interference Units to locate sources of drinkable water. However, due to the units not requiring water, they aren't able to judge the safety of the water sources they provided the locations to. Ganja therefore has to inspect the places personally. Of the five proposed locations, two are swarming with dangerous beasts, one is contaminated with mining residue, one has insurmountably hot water, and only the last is deemed safe.

The group subsequently acclimatizes to life in the 6th layer. Vueko grows closer to their guide, Irumyuui, as she is quick to pick up Vueko's language. Irumyuui reveals to Vueko that she was considered a cursed child in her tribe due to being barren and thus was to be a sacrifice to the Abyss, rather than a guide for Ganja. Vueko, having experienced a similar fate in the past, sympathizes with Irumyuui and develops a mother-like bond with her. Later on, Irumyuui adopts a Hermit Rat found in a hat. Sadly though, it gets snatched by a predator during their time together.

After some time had passed, Vueko wakes up and realizes Irumyuui has gotten diarrhea. Inspecting her feces, she notices transparent insect eggs therein. Her attention is then urgently requested as one of the member's toes had melted and hardened like lead as well as the mass spread of among Ganja. There is not enough water to treat all patients, and thus Belaf, Ajapoka and several other members embark to gather some.

The group who departed the camp arrives at the watering hole. Belaf becomes doubtful of the water and asks Ajapoka to get a sample of rock from the lake bed. He then realizes it is not rock, but the hardened remains of a giant creature. Not knowing of any other possible source of safe water, they decide to bring water from the hole back and to warn the rest of Ganja about its true properties.

Meanwhile, the food-scavenging group returns with considerable losses, counting only three members who die shortly after arrival; they transformed into tree-looking beings. Wazukyan shows Vueko an egg-shaped Relic from one of the food-scavenging group member's bag and asks her if she knows what it is. Vueko does not know its purpose and Wazukyan contemplates whether the Interference Units would know. 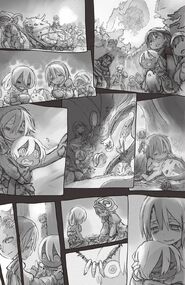