Made in Abyss Chapter 048

The Compass pointed to the Darkness

The Compass pointed to the Darkness is the forty-eighth chapter of the Made in Abyss manga series.

The chapter opens, showing a younger Vueko looking at the Star Compass in her possession, while being under deck of a ship.

Gazing at it, she is reminded of the story her horrible, good for nothing, foster father used to boast about. It was back in his youth, when he went out to the sea for a shore hunt. He and his crew found a ship sending up smoke in the ocean. After boarding the ship, they quickly found its crew had died in very unnatural ways, with one having been burned without any flames around, another still moving, despite having been bisected, and another with their organs spilled out. Only one crew member survived, but he was so traumatized that he could no longer speak. When Vueko's foster father finds the Star Compass on the ground and picks it up, the last crew member, upon seeing it, begins to deliriously mutter about the "Golden City" and how his crew "didn't reach it." He notes that the Golden City is where the compass will stand up straight. Shortly thereafter, the crew member dies.

Believing he had been chosen to discover this "Golden City", Vueko's foster father used to tell her this story, while abusing her, to remind her that he was special and that she had no worth. Vueko notes that she wasn't like her foster father, who only had one boastful story to tell. She has prepared herself for the journey to the Golden City.

Remembering this past, combined with the ship's motion, causes Vueko to feel seasick, and she runs up on deck and throws up into the ocean. Wazukyan, the Leader of Vueko's Explorer Squad, jokingly remarks she is getting quite good at vomiting, but also reassures her they will soon reach their destination: the position Vueko's compass points to.

When Vueko questions if she really should be the one holding onto the compass, Wazukyan reassures her that she is their guide and one of the Three Sages before exiting the scene to "catch a mouse!". Belaf tells Vueko not to worry and that Wazukyan may be quirky but wants the best for all of their squad. He notes that Wazukyan can really see the future. Vueko, still in self-doubt, asks Belaf if someone as ugly as she should really be allowed to be a Sage of their squad, Ganja. Belaf replies that beauty is subjective, and in the eye of the beholder. He notes that virtues like pressing forward no matter how hard things get is what he thinks is truly beautiful. As such, he thinks Vueko should give herself more credit and encourages her.

As they continue toward their destination, a storm destroys all other ships travelling next to them. Vueko uses the compass to find a solitary island in the middle of nowhere. Wazukyan surmises that the island is where they need to go. They finally reach their destination; the island. Which turns out to be the Abyss.

While on the island, they discover a tribe of natives with whom they exchange information. Belaf notes that previous travelers were violent and cruel, so the natives are reluctant to exchange information. Vueko gives her Star Compass to the natives in exchange for information. Belaf asks her if it is wise to give up her compass, to which Vueko tells him something he told her earlier: "The object of my gaze... lies within the darkness." She tells Belaf that she wants to go looking for a light that no one else has found.

The crew learns from the natives that the Golden City does indeed exist. It can be found by descending into the giant chasm in the middle of the island, the Abyss, but one cannot ever return to the surface once they have descended.

As they prepare to descend into the hole, they notice a child from the natives has followed them. Upon translating a fresh tattoo on the back of the young girl, Belaf tells the rest of Ganja that she has been "relinquished to the Abyss," due to her being unable to bear children. Vueko suggests employing her as their guide. The child tries to warn a Ganja member before he climbs a cliff to scout the area. But the man can't understand her and climbs. He is suddenly hit by the curse of ascending and falls to the ground. Belaf speaks with the child, who is able to abstractly explain what happened. Wazukyan agrees to allow her to be their guide.

As they start delving into the Abyss, Vueko foreshadows the mysteries they saw and the future unexpected developments. 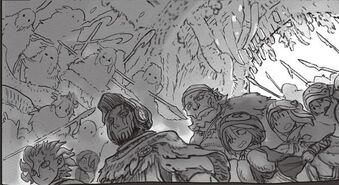