Made in Abyss Wiki
Register
Don't have an account?
Sign In
Advertisement
in: Manga Chapters, Spoiler, Volume 7 Chapters

Made in Abyss Chapter 047

The Secret of the Village

The Secret of the Village is the forty-seventh chapter of the Made in Abyss manga series.

Riko and Reg, reunited, engage the Fuzosheppu once more. As Reg launches for the finishing blow he stops abruptly, due to the creature being only a left-behind empty shell already. Before figuring out what happened to the Fuzosheppu, Wazukyan appears congratulating them by highfiving Riko and explaining that the Queen, that formed the "core" of the creature has died, and thus leading the rest of the hive to disperse.

Riko asks the sage of a way to get Nanachi back from Belaf and after a brief moment of thought Wazukyan supposes that it would be possible with a part of Faputa . While Reg returns to Faputa to ask her, Riko takes a rest in the village with Vueko and the other villagers.

Vueko reveals that she was part of the original Delver-Group that went to the 6th layer, and was a sage herself. Meanwhile, Faputa agrees to give Reg a part of her if he keeps his promise. Upon asking for more information on the promise between them, Faputa rips off one of her ears and arms and the chapter ends with her happily handing them to Reg telling him "Together, we will…exterminate them all, Reg." 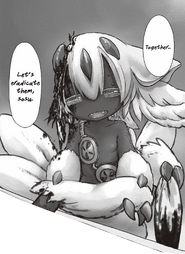 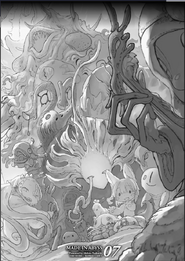