Made in Abyss Wiki
Register
Don't have an account?
Sign In
Advertisement
in: Manga Chapters, Spoiler, Volume 7 Chapters

Made in Abyss Chapter 046

The Luring is the forty-sixth chapter of the Made in Abyss manga series.

Riko, about to choose to give up half her internal organs in exchange for Nanachi, is stopped by Majikaja who says "Lose anything and it's over." Then Riko is pulled out of Belaf's hut and a Ilblu Balancing occurs in which a creature that has been to the village of Ilblu before appears and terrorizes the village.

Riko sees it head towards the jeweler's and goes to collect Prushka in her embellished whistle form before the shop is destroyed. Juroimo, one of the three Sages, decides that the creature is tough enough that he should get involved in the fight. Riko becomes worried about the village after the Narehate from the market, including Moogie, go to hunt the creature. Riko formulates a plan, after getting an estimate on the value on the creature, to defeat it and get Nanachi back.

Riko enacts her plan to kill the creature, later named an Fuzosheppu, with good success. She uses her knowledge of the Ilblu language to command the citizens within the village to trap the Fuzosheppu using some sort of malleable, mist-like reflective surface and a large net, and then severing it's vitals with spears.

While explaining to Moogie what to do after the Fuzosheppu is captured it erupted in one last stand, attempting to capture Narehate like Maaa, who were standing nearby. "Prushka" tells Riko to use her, and once she does, Reg appears and stops the Fuzosheppu, saving her, Maaa and the other Narehate that had been captured. The chapter ends with Reg telling Riko to "give him his next order." 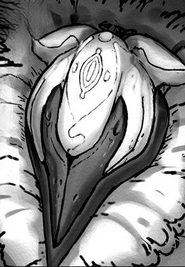 Prushka presented to Riko as an Embellished White whistle (ch. 46) 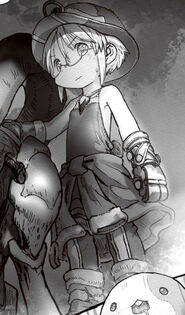 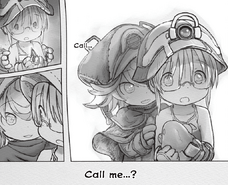 Prushka contacting Riko through the Life Reverberating Stone she became.