Made in Abyss Chapter 003

Riko's Room: Former Torture Chamber is the third chapter of the Made in Abyss manga series.

After a strange child was found unconscious by Riko in the 1st layer, he is brought back to the orphanage. Riko, Shiggy, Nat and Kiyui then attempt to awaken the child. As the boy nears consciousness, he hears the chatters of the four, apparently trying to use an electrical instrument attached to his helmet to wake him up, though he brushs off the voices and attempts to sleep again. However, he is then, immediately and painfully, jolted into full consciousness, screaming, Riko having mistakenly set the dial to 20 instead of 2.

The four cheer in astonishment at the child's awakening, Riko bombarding him with questions while the boy stares into thin air, wondering where he is. He then began speaking, to Riko's further astonishment, asking where he is. Riko, calling the boy "Robot-kun", replies that he is in her room, in the city of Orth, at the top of The Abyss. The boy then asks if Riko, Shiggy, Nat and Kiyui were torturers, and is told by Nat that they are actually apprentice delvers from Belchero Orphanage. Riko, rudely interjects, asking "Robot-kun" to introduce himself. The boy answers he himself is not sure of that. Riko asks him if he really is a robot. Riko, greatly excited, proceeds to explain her methods of confirming the boy's robotic nature, much to the shock of "Robot-kun".

As Riko and Nat wonder about the boy's memory loss, Shiggy hurriedly comes to them, warning them that their misuse of the electrical device has caused an orphanage-wide blackout, and their teacher, Leader, is coming to their room. The children hurriedly prepare for Leader's arrival, with Riko hiding "Robot-kun" under a sheet, asking him not to come out or Leader will punish them. Only a few seconds later Leader is already heard yelling at the door, asking for Riko to come out and explain. However, he rushes into the room almost immediately, ignoring Riko's explanation. Noticing something under the sheet, Leader immediately removes it, but only finds the electrical device attached to a helmet, to Riko's surprise. The teacher then turns to Riko, asking about what she has to say. Riko replies weakly that she will not do so again. As Leader begins lecturing Riko, she spots "Robot-kun" dangling from the ceiling, through a rope extending from his left arm, watching, though the boy quickly pulls himself up the rope, disappearing into the ceiling again upon noticing Riko spotting him. Leader then notices Riko is not paying attention to him, and thus pulls her away to receive her punishment. As Riko yells "Sorry" weakly while Leader drags her out of her room, "Robot-kun" nervously watchs from the ceiling bars.

The boy, dropping down from the ceiling, begins contemplating himself. He recounts his experiences, and then checks his body, trying to confirm if he really is a robot. He wonders if looking like a robot will actually make him one. A strange emblem appears on his helmet's glass lens when he wears it. When Riko suddenly make an appearance, managing to make it back by slipping away when Shiggy, Nat and Kiyui were caught. As Riko inquires to what "Robot-kun" was doing, Leader is once again heard yelling at the door. Leader then furiously drags Riko away to write her soul-searching apology, while "Robot-kun" yet again watches nervously from the ceiling. 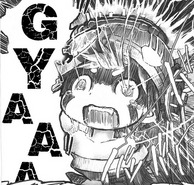 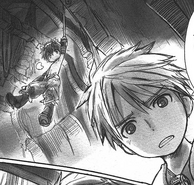 Reg using his extendable arm to avoid detection by Leader. 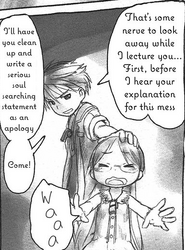