Made in Abyss Chapter 002

The Abode of Trees and Fossils

The Abode of Trees and Fossils is the second chapter of the Made in Abyss manga series.

It is Riko's first solo excavation where each Red Whistle Delver is assigned to a different area, though she travels with Nat, due to their areas being next to each other. Riko is lost in thought about the destination of the gondola system transporting Delvers deep into The Abyss, until Nat interrupts her, wondering about the unusual quietness of the area in that morning. Riko is angered, thinking that Nat meant she was annoying, but Nat clarifies that the area lacks the usual presence of Hammerbeaks. Riko notices as well, though Nat sees this as an opportunity to salvage Hammerbeak nests, which contain many trinkets.

At the altitude of about 100 - 220 meters, Riko excitedly discovers a trove of trinkets. She begins collecting the trinkets, when, underneath a stone slab, a Praying Skeleton is revealed, slightly surprising her. She gives the body a prayer before continuing. After an amount of time, Riko's bag is then bloated with trinkets inside. The bag being very heavy, she calls out to Nat to ask him to carry it, but he does not respond. She then hears a strange noise, and moves to check it out. What Riko finds freezes her: a Crimson Splitjaw, usually found only in the 3rd layer, attracted to an unconscious Nat lying on a cliff nearby. Riko blows her whistle, signaling for help, but the close distance allows the Splitjaw to notice her. With a whip of its tail, the creature sends her flying. Riko falls and hits the ground hard. In a lot of pain and thinking her arm is broken, Riko manages to sit up and wonders whether Nat is safe. The Crimson Splitjaw however, wastes no time and swoops down trying to attack her again.

As Riko braces herself, a bright flash of light overwhelms her, and when she opens her eyes, the Splitjaw is badly wounded; a large hole burned into its body. The creature then plummets down a cliff. As Riko is still shocked from the events, Nat calls her, having awakened, and asks if she is okay. Riko tells Nat to head back first while she rests, but in fact she is trying to find the source of the light earlier. As she is searching, Riko finds a strange, glimmering necklace in the grass, which she puts on.

After a while, Riko stumbles upon a mysterious sight: a strange child lying face-down in the grass. As Riko checks the boy's condition, she makes a shocking discovery: that the boy isn't actually human, but a robotic life-form. As Riko looks beyond the cliff where she found the child, into the Abyss, she asks him: "Where are you from?"

This chapter was adapted into the first episode of the Made in Abyss anime series, with some changes to several details of the manga. 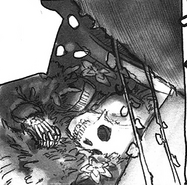 Praying Skeleton found under a stone slab by Riko. 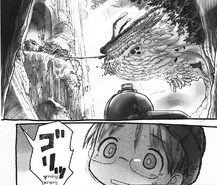 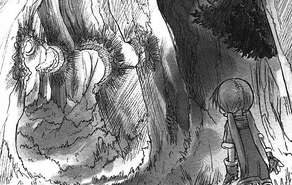 The damage caused by Reg's Incinerator. 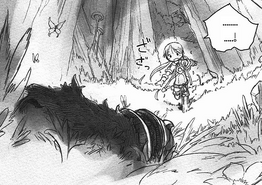