Made in Abyss Chapter 001

Orth: The City of the Great Pit

Orth, Town at the Edge of the Abyss

Orth: The City of the Great Pit is the first chapter of the Made in Abyss manga series.

The chapter begins with a girl holding a ball compass to the sky. Riko is shown to be standing, looking out of a window at what appears to be a gigantic, bottomless pit, called “The Abyss”. She then proclaims that the “Star Compass” points not to the sky, but to the bottom of said Abyss. Sitting nearby were her friends, Nat, Shiggy and Kiyui, playfully acknowledging the beginning of her rant. Riko, even more determined, exclaims about the ball's truth finding properties. Her friends agree, referencing yesterday, where it found the angle of a slope when Riko dropped it, and it almost escaped. Nat then tells Riko that one can tell which is top or bottom without using any compass, making Riko wonder whether that was true. The four are then called to deliver some letters. Nat rushes off first while mocking Riko for her earlier rant., taunting her that the compass is supposed to be turned in to their teacher, and she could be punished. Riko, though distressed, quickly composes herself then takes Kiyui with her to deliver letters.

Later that night, Riko’s room – also known as the “Former Punishment Room” – is still brightly lit. Riko is preparing tools and equipment for a trip into the Abyss the next day. Afterwards she goes to bed, though does not sleep right away , thinking about what she will do the next day, and how she should convince her strict teacher, Leader, to allow her to delve in deeper altitudes. She then thinks about her mother and how, thanks to her, she was given a chance to be Delver. The girl then falls asleep.

Early next morning, Riko awakes and prepares herself, then quickly leaves to begin her delving trip into The Abyss. As Riko begins her trip, Kiyui is at home reading a book about the Abyss. A narrative begins; the narrator explains the allure of the Abyss, as well as its currently known features, and how people have been exploring the great pit for 1900 years, since its discovery, to the formation of the city by the Abyss, Orth.

The scenes switches back to Kiyui, now soundly asleep. Nearby is Riko, having returned from her trip, sitting near a window and peering into the Abyss with a telescope. Riko then spots a nest of Hammerbeaks, and watches as one is attacked by an unknown predator, but the rest then retaliate. Riko's yelling of excitement catches the attention of the telescope's owner, Laffi, reading a letter from her husband Hablog. Riko then inquires about Hablog's location, and is told that the Black Whistle Delver is approaching the 2nd layer of The Abyss. The woman and Riko then discuss the shared goal of Hablog and Riko: to be White Whistle Delvers. They are then interrupted by Shiggy, who comes to call Riko back to the Orphanage. On the way back, Riko and Shiggy then continue discussing the goal of becoming a White Whistle.

Returned to the Belchero Orphanage, Riko then attends a briefing where her teacher, Leader, tells them about the new rules applied to their delving studies, which include delving alone in assigned areas. Then the head of the Orphanage, Belchero, speaks with the apprentice delvers, emphasizing that any of the valuable objects in The Abyss, called Artifacts, are to be turned in to the Orphanage if recovered, to provide funding for the Orphanage’s continued operation. She then warns the apprentices that disobeying will result in punishment, giving Riko a sharp glare while doing so.

After the briefing, the apprentices are assigned delving areas, Riko being assigned the same place she delved the last time, driving her to try to convince her teacher to assign her a deeper one. However, Leader disagrees, explaining that delving in the previous area would be more efficient. Riko then explains her dream of becoming a White Whistle to her teacher, so that she could see her mother again. Leader, though still disagreeing, promised to grant Riko's request if she manages to find artifacts with the most value on the next day’s trip. The chapter ends with a scene of The Abyss, the last unexplored place in the world.

This chapter was adapted into the first episode of the Made in Abyss anime series, with some changes to sereval details of the manga. 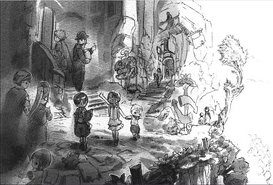 A corner of Orth