July 7, 2017 (Season 1)
July 6, 2022 (Season 2)
Made in Abyss is the Anime adaptation of the Manga of the same name by Akihito Tsukushi. It was directed by Masayuki Kojima at Kinema Citrus, with Hideyuki Kurata writing scripts as well as Kazuchika Kise designing the characters. The anime premiered on July 7, 2017 on AT-X and other channels.[1]

Miyu Tomita and Mariya Ise performed both the opening theme "Deep in Abyss" and the ending theme "Tabi no Hidarite, Saihate no Migite", the latter in collaboration with Shiori Izawa.[2][3]

On May 5, 2021, the official anime account of Made in Abyss announced a second season which will adapt content of the Chapters beyond the third movie.[4] The second season will premiere on July 6, 2022 on AT-X and other channels.[5][6][7]

An enormous pit and cave system called the "Abyss" is the only unexplored place in the world. Strange and wonderful creatures reside in its depths, and it is full of precious relics, called Artifacts , that current humans are unable to make.

The mysteries of the Abyss fascinate humans, and they head down to explore. The adventurers who venture into pit are known as "Delvers ". A little orphan girl named Riko lives in the town of Orth on the edge of the Abyss. Her dream is to become a Delver like her mother and solve the mysteries of the cave system. One day, Riko starts exploring the caves and discovers a robot who resembles a human boy.

Tantalized by the mysteries of the Abyss, Riko and her new friend descend into uncharted territory to unlock its mysteries, but what lies in wait for them in the darkness?

Made in Abyss has been met with critical acclaim and widely considered to be one of the best anime shows of 2017. Nick Creamer of Anime News Network praised the anime for being adventure-focused, as well as its efficiency in establishing its premise. Creamer also praises it for its artwork and music that highlights the beauty and terror of the Abyss. Julian Malerman of THEM Anime Reviews praises the show for being a well-executed emotional drama saying "The manner in which the show approaches this conclusion is often brutal and alienating, but the final answer is simple and pure. It sings."

The series was awarded Anime of the Year and Best Score at Crunchyroll's 2018 Anime Awards. 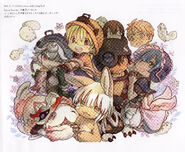