Episode 10
The Goblets of Giants is the 4th layer of the Abyss. It is a sprawling jungle of unique, awe-inspiring and deadly fauna. This layer is characterized by a deceptive fusion of beauty and danger.[1]

It is a humid jungle of strong vines, weaving giant concave discs called Flat-creepers.[2] The tops of the discs capture water from the air and the light from the forcefield refracts from this water, giving the scenery a blue hue.[2] The landscape is constantly changing, and as such, no attempts have been made at creating a detailed map of its features, beyond pointing out non-jungle landmarks.[1]

The high concentrations of water in this region causes high humidity and sometimes fog.

In an area away from the vertical shaft, in the upper region of the fourth layer, is Nanachi's Hideout, which is unaffected by the curse.[3]

In the middle region at the 9,000 meters mark, there is the famous Garden of the Flowers of Resilience, an area filled with Eternal Fortunes, the trademark flower of the Abyss.[4] The distinctive sight produced by the countless glowing flowers make the garden one of the most beautiful landscapes of the Abyss. 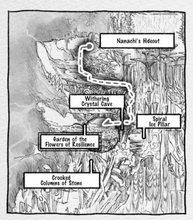 Map of the 4th Layer

Garden of Flowers of Resilience