Episode 9
The Great Fault is the 3rd layer of the Abyss, being a narrow, 4 kilometer gorge surrounded by countless interlocking caverns with many creatures, both harmless and deadly, lurking inside.[1]

The 3rd layer is a 4000m vertical drop down a circular shaft that is home to large aerial predators, such as Madokajacks. The vertical drop is significantly smaller in diameter than the other levels of the Abyss, as evidenced by the Abyss Map.[1]

The only viable way down is through a network of caverns, dens, and holes. These were likely made both naturally and by Delvers, ancient humans, and Neritantans.[2]

While the inner caverns mainly house non-aggressive creatures, occasionally Madokajacks will nest in the larger caves.[3]

Crimson Splitjaws have also been known to use their brute strength to infiltrate the side caves in order to capture their prey.[4] Amakagame are also located in the cave systems and can pose a threat to Delvers.[3] However, their main source of sustenance are Neritantans and they do not actively hunt humans.

Once at the 6750m mark, the central shaft has many spiky eggs stuck along its walls.[5] The eggs hatch into Kazura Squid that swim in the tallest goblets in the fourth level.[6]

An ancient 'pirate ship' was seen partially exposed in the side of the Great Fault.[7]

Spiky eggs embedded in the lower level of the Great Fault. 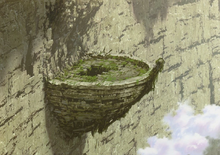 It is possible that many unearthed Artifacts could be found in this area, however, the layout and predators within this level make it too dangerous for anything to be excavated.[7]