Episode 5
The Forest of Temptation is the 2nd layer of the Abyss. It is a large forest with surprisingly diverse environments, and it is here where one truly gains an understanding of the horrors of the Abyss.[1]

The Forest of Temptation is the first truly dangerous section of the Abyss. The fauna and environment suddenly change, turning into a tropical rainforest with huge vegetation. It is filled with dangerous beasts and ascending becomes increasingly difficult, making it a place where only experienced explorers can delve to. If a Red Whistle Delver somehow gets to the 2nd layer, search parties are called off and it is treated as a suicide.[2]

Throughout the top half of the layer, there is a forest of massive plants resembling lilypads. These plants provide good cover from potential threats; however, they also obscure view of the landscape, resulting in Delvers having difficult times telling where they are. Luckily, their leaves always point toward the center of the Abyss. So with that in mind, and the fact that Amagiri grows on their stems, lost Delvers can find their way relatively easily.[3]

Deeper in this layer, there is an area known as the "Inverted Forest". This is an area where updrafts and wind currents coming from the Abyss are so strong that the environment effectively flips, creating a forest of upside-down platforms that Delvers have to jump across—even water flows upwards. The Force Field of the Abyss, the cause of the Strain of Ascension, is weaker here compared to the other areas of the 2nd layer. Thus the environment here is also darker and colder.[4]

Because of the weakened Force Field, an observation camp was built from a particularly large tree in the Inverted Forest, the Great Tree of Porta, to serve as a resting point for Delvers. The camp is now called Seeker Camp, and is run by the legendary White Whistle Delver Ozen and her team of Delvers, the Subterranean Bandits.[5][6] 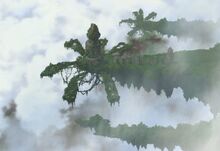 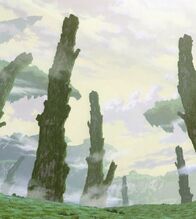 Scenery in the 2nd layer 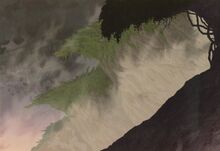 Beginning of the Inverted Forest in the 2nd layer