Edge of the Abyss

Episode 1
The Edge of the Abyss is the 1st layer of the Abyss. Its composition is fairly tame compared to the deeper, more alien levels. The 1st layer is the only part of the Abyss that could be considered, in some form, "safe".[1]

The 1st layer is the most shallow section of the Abyss, right below the town of Orth. A gondola system, which is part of the Grand Pier, was built at approximately 50 meters below the surface to quicken the descent into the Abyss, which goes down 580 meters to what Riko presumed to be the Stone Ark, a rocky protrusion at approximately 600 meters.[2][3]

Located on the 1st layer, 300 meters from the surface, is a Burial Tower where hundreds of skeletons, estimated to be around 2000 years old, lie with their hands clasped in prayer.[4]

The environment does not really change, and wildlife consists of mostly harmless animals; though occasionally predators from the 2nd or 3rd layers might ascend in search of food.[5] There are not many treasures nor Relics either, but there is a considerable number of Praying Skeletons.[6][7]

Since its danger level is mild, inexperienced Delvers, such as Red Whistle Delvers, often go down into the 1st layer to search for Artifacts.[8]

It was here that Reg was found unconscious by Riko after using his Incinerator to save Riko from a displaced Crimson Splitjaw. Riko then took Reg back to the orphanage.[9] 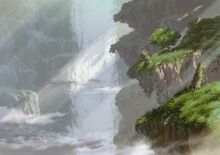 Waterfall in the 1st layer 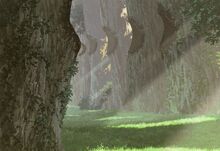 Scond Scenery in the 1st layer

Clearing in the 1st layer